Plays a QuickTime movie on the desktop behind the Finder icons.
Quartz Extreme recommend for better performance.

To allow clicking on the icons of the Finder, the window must ignore any mouse click, so I'm sorry that I must remove the control bar from the movie player control.

Just drop a movie on the application icon or use the Open command from the menu. Press the "esc" key at any time to quit the player.

This application is freeware and provided as is.

You find the Realbasic project file in the download. You can watch the source code online:


Just playing one of the trailers from Apple's Website: 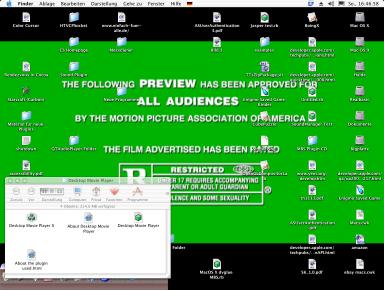